My two-piece gown is done.
I’ve self-lined both the skirt and the blouse. Here is how I cut and sewed the skirt. 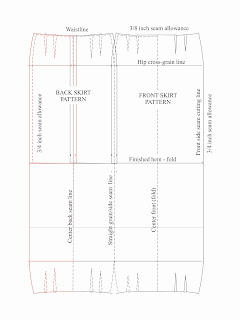 To speed making the outfit and to produce a high-end skirt, as you can see from the pattern I cut the entire skirt in one piece.

Here is a picture of the skirt after I cut it. It is face-down. I have pinned where I will sew the two narrow edges so that the finished skirt will appear to have a back seam and a right side seam. The skirt was cut the full-width of the 45 inch fabric. That meant I only had to cut the waistline at either end of the fabric, as the selvages run down the left side of the skirt.  It also meant I had no hem to set. The skirt is full-length, slit up the left side seam to the knee. I had made a muslin to make sure I had the length correct.  I wasn’t sure I would have enough fabric for a waistband so I waited until I had the blouse cut. But I even had enough fabric to sew cording around the neckline, and the armholes as well and across the top of the cuffs. When done the scraps that were left were enough to fill one hand. The entire ensemble was cut from 4 yards, 24 inches. That was the length of the fabric and the exact yardage needed to cut the skirt and blouse. I really lucked out on that one!
Before I cut the skirt I checked the fabric. It had been folded too long in the store where I had bought it on sale. There was a streak down the entire length of the center of the fabric. So I adjusted the skirt pattern so the right side seam would lie down the exact center of the pattern. Once I had sewn the narrow edge down the right side seam – the pinned center of the fabric in the picture, the streak was gone.

The finished skirt looks really great. The top also sewed well. I set the invisible zipper in the top and it went right in, thank goodness.  The cording was tricky, but I’m glad I put in the cording. The ensemble is very basic so it needed the cording to give it some jazz.