On the left Shira and her brother Jacob pose in the synagogue. Shira is wearing the dress she designed and that I helped her make. The process is described below…

Shira, my 12-year-old protégé asked if I would help her make a special dress for her Bat Mitzvah, a ceremony that is a rite of passage when she, as a Bat Mitzvah, would acquire the rights, responsibilities, and privileges of an adult Jew. She needed a really special dress that would reflect the importance of this ceremony.

Shira and I began by sketching the dress.  We did three designs. The first design had a bow in the back. The second design had cap sleeves. The third was the design Shira decided she liked the best. I was very happy with her choice.

We used the skirt pattern Shira had already drafted, combining it with bodice patterns we developed from a McCall’s Enchanted Forest pattern I had bought years ago.

Next we tested the drafted patterns in muslin. There were three fittings.  The first, not shown, was done with the basic bodice. The seam lines were marked, then the pattern was split to create three bodice pieces. The shoes were found on line.

Once we were sure of the design and fit it was time to visit the fabric store. We shopped at Gaffney Fabrics, 5401 Germantown Ave. at the corner of Coulter Avenue in Philadelphia.

Shira chose apricot and gold satin fabric. We also found gold trim that matched the design of the shoes. Gold metallic thread was purchased to use with sewing the trim.  Labels were later purchased, as one should always sign one’s work.

This is the last fitting, a check to make sure that everything is done correctly and that the outfit is ready for the big day. A jacket completes the outfit to cover Shira’s shoulders during the ceremony. The back is now open between the top of the skirt and the bodice. The braid now provides straps to hold up the bodice in the back. The skirt closes with an invisible zipper. The dress is fully lined with the same fabric used to make the shell.

Later, the ceremony over, Shira has her picture taken with many people, including the most important man in her life. This is a special day for everyone.  We all celebrate at a fantastic party.
To see a larger better view of this video visit Contemporary Fashion Education, Inc. 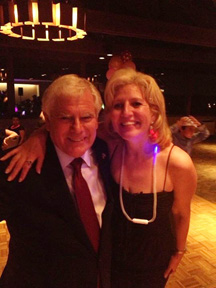